As part of our UK holidays, I managed to find this event which looked like a fantastic event. Even though the details were a little sketchy and the "orienteering" bit would be interesting, I thought I'd give it a go and was not disappointed. From the initial registration fee of £8 (how many events in Australia are under $20?), with the promised combination of road a trail running with the ability to get out and discover Edinburgh via the hills. Preparing for this was hard. With the combination holiday lunch/dinner drinks and wanting to get some other runs in different areas countries as part of the holiday, I felt still sore from the last run - Isle of Arron - GoatFell (a 860m hill)  a couple of days before. From the Website  (explains it the best): Every year since 1980, on the 3rd Sunday in June, a few hundred hardy individuals take part in one of the most unusual running events in the country, The Seven Hills of Edinburgh — a combination of road-running, cross-country, hill-running, and urban orienteering... 14 miles in length and with 2200 feet of ascent/descent. To assist with my navigation - in the orienteering event I had managed to find a Garmin GPS event that someone had done in the last year, and uploaded it to my watch. If there was a point where runners were splitting, I would go with the route on my watch - this provided to be quite effective in some times of on the spot route decisions. 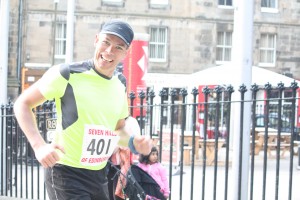 The first hill, being the Edinburgh Castle wasn't really a hill coming from Carlton Hill, but it had all the character and the cobblestone roads, with the crowd factor - although the crowd really had no idea who all these random runners were - but it was pretty funny every one cutting through them up to the Castle. Then it was one of the longer legs via the suburban streets out to Corstorphine Hill. The groups of runners were getting smaller, and there were a few going in different directions to the pack along this section. From Corstorphine Hill to Craiglockhart was mainly roads, with the final section leading onto the hill being a lovely quite steep dirt incline. I had noticed a few runners going around this, but I had committed to it, and it wasn't too bad to get to the top. I think it was slightly faster than going around (even with stopping at the top to regain composure). Over the other hills, though some interesting random shortcuts, then through the University (I think), then choosing to climb/jump the 3 meter wall as opposed to queue (of about 20 people) to squeeze the wrong way through a rotating turn-style. Leading up to Arthurs Seat. Easily the biggest hill of the lost saved for last, but once getting to the top, neglecting to really appreciate the view, and then it was back down the hill. Finally from Arthurs Seat back to Carlton Hill was the steep decent, then crossing over a 'ladies in pink' 5mile event. Quite interesting crossing over their track and through the 100s of spectators. Got a little lost here - as the other 7 Hills runners were quite sparse, and 100s of spectators of the over event. Fortunately followed the Garmin and re-found the track back up to Carlton Hill. 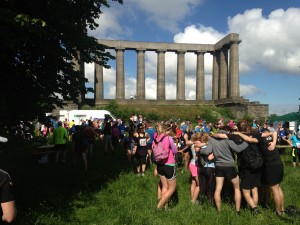 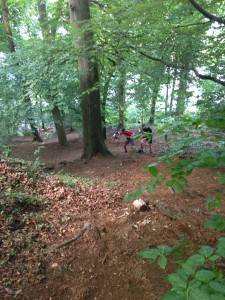 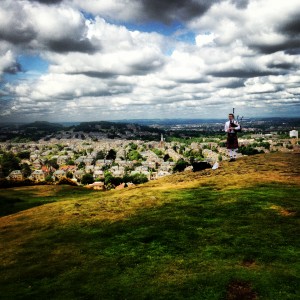 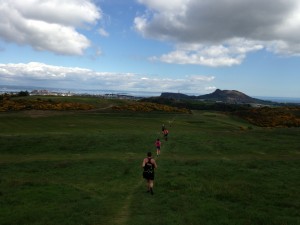 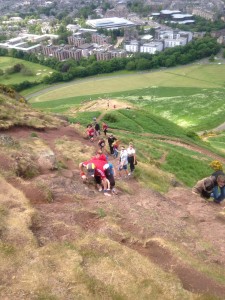 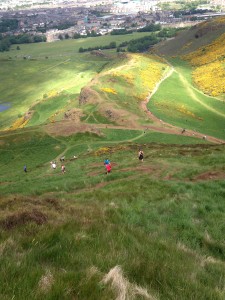 If you're in Edinburgh at this time of year - I would certainly recommend this - although this year did see out prior to the day so you would need to register beforehand. Also, a good local Event Blog is found here. Strava Details: