Until March this year, I was never planning to do a road marathon, until one night where Lisa and I got carried away at the MND&ME charity auction - and next thing we knew - I had a confirmed ticket to the 2017 NY Marathon. I was actually pretty excited to get to New York to run this event. I had always heard great things about this one, so figured - if I was going to do one marathon - this should be it. So, the variation of training to my usual trails began, and I managed to get up to a comfortable pace for 35kms on the road. Typically on the trails I am a slower runner - so the road faster pacing was a novel addition to the typical runs I do. Getting to New York was easy via Los Angeles on Qantas, arriving on the Thursday night, we manage to get to an American football game (Jets vs Buffalo Bills) on the same night to ensure we slip into the right time-zone and sleep pattern. The Marathon was on the Sunday morning, my wave started at 10.40am (Wave 3). Logistically though, we had to get a bus from the Manhattan Library (6 or so blocks from Central Park) at 6am to get us all to the starting area on time. There were massive queues getting on the bus, but we kept on swiftly moving forward and onto the 100s of buses that were available to us. Waiting for our start, it came surprisingly fast, after a being rugged up in my blanket and warm pjs, we stripped off into the race gear and donated all the "keep warm" clothes we had as warmers to the charity bins and headed to the start gates. To appreciate the starting of 50,000 runners (all doing the marathon) and ensuring everyone had the ability to try to get the time they had requested on the entry, even the start line village logistics was massive. There was 4 waves, each wave had 3 start lines and each start line had 5 entry points. Allowing you to be grouped with all the other liked speed runners. Each of the start lines had a separate first 8 miles of the course - until we joined up - eg. 2 lines went on top of the Stratton Island Bridge while another line went under the bridge. 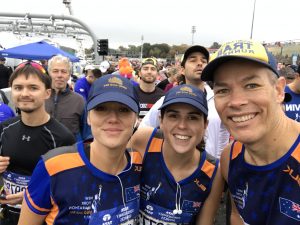 Once I was in the right gated area, we shuffled around to the start line at the end of the Bridge, and with the "American National Anthem" and the cannon fire we were off. Heading over the first Bridge was a steady incline, lots of high spirits and runner encouragement. It also helped having the entertainment of the policemen standing on their cars with the stereo pumping and dancing with encouragement. Right then I knew I was in for a special run. 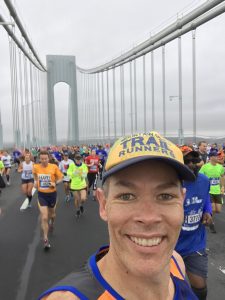 Over the Staten Island Bridge, we were welcomed into Brooklyn with the masses of crowds. The cheering was absolutely crazy. I am sure in most segments, it was 3-5 people deep cheering you, lots of people shouting out your name (it helped that I had my bib with my name on the front). Also with lots of music bands /djs, everytime you ran past music source and they would fade into the distance, the next one would start. It was very hard to go slow and paced with all this fanfare! Running through Brooklyn was the biggest highlight, given I was still fresh in the body and fully took in all the atmosphere! The next borough was Queens, which also was around the half way mark. Again massive crowds and lots of posters of motivation. Some of them  I can remember were: 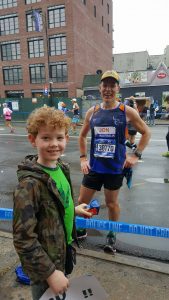 Lisa and Rupert also managed to make it to the 14 mile mark - awesome having the text messages come through on my watch to try to work out exactly where they were. Although sending "next to the Band" - didn't really help - but I found them and managed to enjoy a bit of time with them, and giving Rupert some of the previous choccies I had picked up along the way! Just after seeing them we climbed up and over the Queensboro bridge - a long incline on the second level (under the top level). Getting through this, we made our way around the corner and up towards The Bronx. A massive long straight road (along 1st Avenue) - this section was a mental struggle, going up and over the small hills - you could see the masses of runners in the straight line in front of you. This section was a straight roads from 59th to approx 135th streets - leading into, The Bronx. The proud Bronx. We learnt that we were in the Bronx very quickly by alot of the supporters. The Bronx was also where my body started to have enough of this speed. I was starting to flare up my hamstrings with a potential cramp - a lot higher in my legs than I would normally get the niggles. From where with still 10km to go, I slowed the pace down and tried to enjoy the crowds more. I had been told a technique, that if you want a pick me up - run near the sides of the crowds and get the cheers and the high 5s, and if you want isolation and just power on - go to the middle. This was so true. Trying to keep on the sides, it kept me picked up for the long straight back into Manhattan, again another long straight back to 86th street, until we cut back into Central Park. 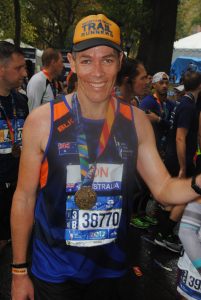 Thinking the Central Park section wouldn't be too long, it seemed to go forever! WE had walked it, in the previous days, but it seemed to go for-ever! Finally finding the final hill to the finish, I made it over with a smile and almost nothing left in the tank. Happy to have run a pace that was probably too fast at the start, but managed to pull it back for the last 10kms and enjoy the crowds more. I was initially targeting the 4 hour finish, but completely happy with the 4:15 finish. 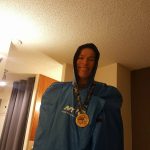 Once I got some mandatory photos, the alfoil blanket, we trekked back out through Central Park and via a few aid station, getting more food, bags of goodies and finally the blanketed poncho! Totally awesome option. I think I walked about 5km back to the hotel...it was a pretty funny sight - everyone with their ponchos on a walking like zombies! 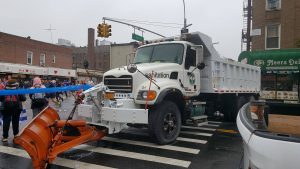 Security at this event was massive - and that only what I saw. I am sure there was a lot more going on behind the scenes. Massive appreciation to the NYPD  for a completely perfectly run event. I'd guess that there were 1000s of NYPD officers and vehicles along the course. These trucks or similar were at nearly every intersection of roads Top Tips: 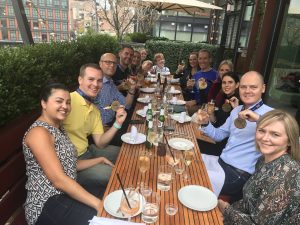 Stoked to have run the NY Marathon, and really appreciative of all the logistics that were provide by Paul and the MND&ME team. It certainly made it easy for the runners! And also got to meet and make some new friends that we share a new bond that not too many others in Oz that will get to experience. If you're on the fence about if you want/not sure if you can - give me a holler - I am sure your will be booking your ticket for the next one in no time! It will have to be a special event to get me back onto a road marathon - I think I have started and ended with an awesome one with an awesome trip to complete it. 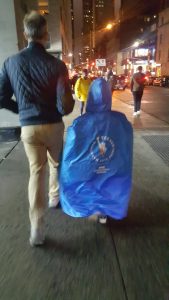